Behind the Scenes on Nationwide (RTE TV)

I got the call on a Tuesday. In fact I got a number of calls that day, but since I was busy show-casing reflexology at a network event I missed all of them!

It was much later that I listened back to the messages from at least three different numbers all saying one thing ‘Caroline, Nationwide are looking for an author who has written about anxiety, ring this number urgently!!!’

I had no pen and in a tizzy, I picked one of the missed numbers randomly and thankfully it was the right one. I was speaking to RTE journalist Helen McInerney. Straight away I detected her warm personality and her enthusiasm for my work.

Helen had already paid a visit to my website, thanks to a tip off from Carlow Mental Health Association. Seeing that, along with being an author of a book about anxiety, I also had accomplished work as a painting artist, travel writer and reflexology therapist, Helen was keen to get my story on national screens. We filmed three days later on a Friday!

How did an anxious village girl leave a secure teaching job to follow her creative dream and end up travelling to faraway lands in the process?

You can watch replay of that Nationwide episode by clicking the image below or – Click To Watch Replay.

Filming with Helen and her crew was fun, especially as it was not just me who got the opportunity to shine, but my friends at Carlow Library (who have been very supportive of my creative development) and the Visual Gallery in Carlow who display my books in their bookshop. My parents were proud to be seen in their beautiful garden and my mother especially thrilled to have her feet on show for the reflexology piece.

‘Seven C’s to Calm – reclaiming your anxiety-free self’ – that’s the book that attracted the attention of this Irish National TV Channel. Thanks to the editor and team at RTE for choosing my story and especially to Helen McInerney for making sure all of my acheivements were on show.

I thought you might like take a peek behind the scenes of how it was all made:

Seven C’s to Calm is available on Amazon – BUY NOW!

If you are a reader of Seven C’s to Calm – please consider leaving a recommendation below.

Thanks for stopping by! 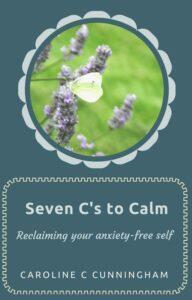